Marketing Videos – The Other Side of the Lens

Blog Marketing Videos – The Other Side of the Lens

When clients come to us for marketing videos, we turn to a person who understands that special blend of visuals, sounds and editing; someone who can put the brick in Kubrick and the cock in Hitchcock.

Revive Videographer Harry tells us he’d happily be mates with Inspector Gadget (because it’d be handy), lots of other stuff*, and shares a valuable life lesson…  from Lego:

‘I bought a Lego death star because I always wanted it as a kid,’ Harry said, on the subject of his most valuable possessions. ‘It was about £450, I think. It was good, but that taught me a valuable lesson…’

‘Sometimes you want things, but ultimately you just look at it on a shelf for six years and realise it was a waste of money. I sold it the other day. £200, so I’ve lost money on it.’

Harry is a videographer, a content creator here at Revive. His day job is to plan and film our clients’ marketing videos, promoting everything from Michelin starred restaurants to hi-tech sensory spaces. He’s done the odd podcast too.

‘I think what I realised is I’m actually not a materialistic person. I thought I was but then I bought a lot of stuff* and it’s just sitting there. If you’re gonna come into my flat tomorrow and just start trashing everything, what am I gonna miss?’

‘I’ve got this Funko pop from Disney World but it’s limited edition. It’s DJ Rex, I’ll probably save that. There’s a ride at Disney World called Star Tours and it’s a Star Wars ride and the character that drives the spaceship was called DJ Rex.  And ironically it’s probably one of the cheapest things in the room.’

Given Harry’s day job creating marketing videos, it’s natural we’d want to know what his favourite movie is. Ever…

Theme parks are actually one of Harry’s great passions, and says he’d go to D23 if he could go to any event in the world.

‘D23 is a convention where they announce a load of rides and stuff*. I like rides. I like my adrenaline park attractions. I’m not talking your Thorpe Parks and your Alton Towers stuff*, I’m talking about real American storytelling in spaces. I like Avatar Land, Florida.’

The (Snotty) Thing – It Came From the Sea

Food is another of Harry’s big passions. He says almost everything is fair game and if he could only eat one thing ever again it would be ‘some jacked up burger’.

‘I used to hate raisins as a kid but even I like raisins now. But that stuff* you have in the shells? What’s it called? The snotty thing from the sea?’

‘Have you tried Oysters? No, I’m not eating it. Slurping snot out of a shell, why would you?’

‘I like fish but I wouldn’t say the taste of fish and seafood is as desirable as steak. I know that’s like a subjective thing… but why would you just want a fishy snot that you drink out of the shell?’

Harry and a Titanic Rumour

So, who would play Harry in a film about Harry? He is unsure.

‘I’ll pick the most unrealistic one.  Who’s like the most handsome man in the world? Leo DiCaprio. I like his chops. I played him at the Titanic Experience. Oh see, you’ve opened another can of worms here…’

Harry explains that when he was a kid, he went on holiday to Florida and visited The Titanic Experience.

‘They recreate the staircase scene when Jack and Rose walk down the staircase and they picked two kids from the audience. I did play Jack Dawson. I think that’s the character’s name.

So why the can of worms?

‘People don’t believe I did. But yeah, I played Jack Dawson,’ said Harry.

‘I had a toy Titanic as well. I used to sink it in the swimming pool. Yeah, ain’t it funny with Titanic, how people are so desensitised to it? But it was actually a stuff* awful disaster that killed so many people.’ 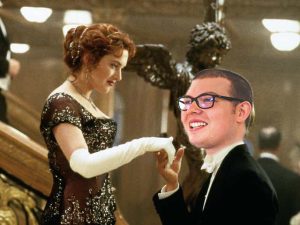 “Madam, may I interest you in a Lego Death Star perhaps?”

Harry says he knew what he wanted to do from the age of four or five. It was thanks to a combination of having a relative that was ‘very into video, equipment and stuff*’ and watching Star Wars as a kid.

‘I was like, I want to do that,’ he said. ‘I always wanted to be a film director. I still hope to be one day. Maybe not a successful one, maybe sort of a “straight to Netflix or Amazon Prime” director.’

Perhaps it’s fitting that Harry would find an early taste of fame on the staircase of an iconic ship because his biggest fear is flying. He describes it as claustrophobic, uncomfortable and terrifying.

‘We shouldn’t be doing it. You’re up there and it’s like “what’s going on?”. Yeah, thousands of years ago we’re messing around with just rocks and stuff*. Now we’re doing this.’

The conversation turns to those ‘people messing around with rocks’ days when barely anyone made it past childhood, let alone got the chance to sit on a plane.

And what did he have for breakfast today?

*No sensitivities were harmed during the making of this article.

But at least one “a#shole”, a handful of “f-words” and too many “sh#ts” to count were edited out completely or replaced with the word ‘stuff*’.

In all seriousness, he’s actually very good at what he does. Take a look below…