…on the Power of Creativity in Business and Marketing

Blog …on the Power of Creativity in Business and Marketing

‘I wandered lonely as a cloud…’ begins Wordsworth’s most famous poem. Subtle and intense, it’s a classic example of creativity (although in the digital age Wordsworth might have written ‘in the cloud’). But can exploiting the power of creativity in business create a similar impact? And are you really using creativity to the full effect in your marketing?

In ads, creativity boosts your commercial successes (as long as you don’t replace the effectiveness for creativity alone). Ads that are designed with creativity pull more responses than those selling the benefits alone (up to 11 times more according to leading author on creativity James Hurman).

Creativity sets your business apart. It builds stronger internal relationships, boosts your company culture for ideas and productivity, increases sales and helps your brand appeal to your customers.

But it’s not just about the big idea. Everyday creativity is something that can be seen in the smallest of projects and has nothing, necessarily, to do with art or music or more traditional ideas of creativity.

In this article we’ll look at:

Stephen King wrote something along the lines of that highly creative people don’t understand why they’re creative, they just are. The likes of Shakespeare perhaps just considered themselves ‘fortunate freaks’ (this is paraphrased from memory – but you can read it in his book ‘On Writing’. It’s brilliant if you write copy).

So, that understanding of ‘what is creativity?’ remains elusive, perhaps permanently so. But most experts agree on creativity having two elements as a basis:

It’s too easy to consider creativity as a gift. For the most part it’s a blend of hard work and other elements, not just inspiration.

It’s highly personal, it’s subjective and can be applied in many ways to so many things.

And sometimes creative people get a bad reputation, for both being different and because creative people can be challenging to work with. They can be prickly, blunt and over sensitive…

… but in return the world’s best inventors and creators have changed the face of the planet and brought us forth from the caves.

Everyday creativity was validated in 1988 by Ruth Richards, Dennis Kinney and other colleagues at Harvard Medical School. They define it as expressions of originality and meaningfulness.

People who get the opportunity to express their creativity deliver great benefits to a business.

Encouraging staff (and yourself) in this way taps into the human need to grow. Without growth you won’t feel alive. Without growth, your business will stagnate.

When it comes to business perhaps you should consider creativity as a problem-solving process, rather than an exercise in fantasy alone. 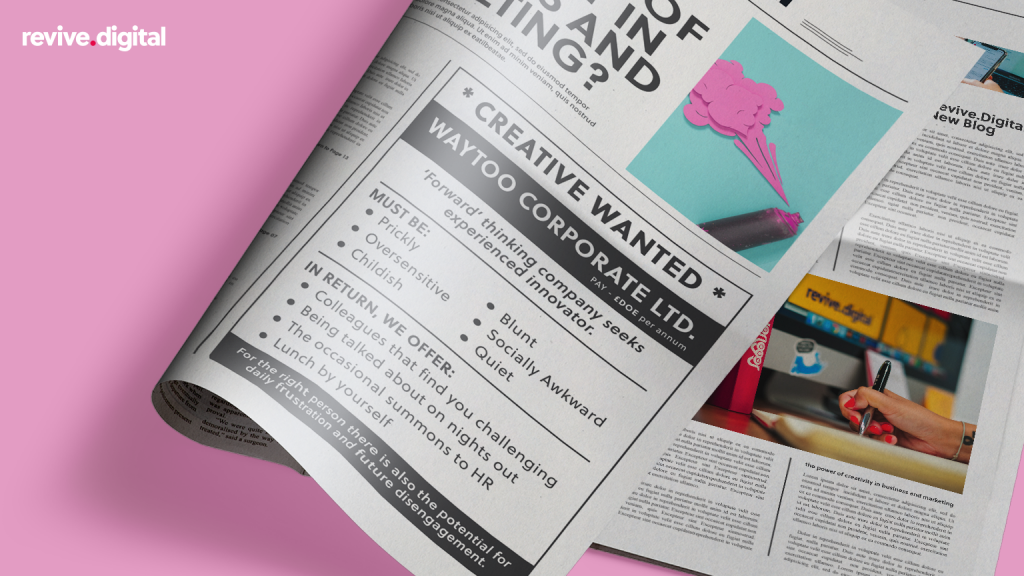 What Makes for a Creative Thinker?

But among those articles, the following are the recurring traits:

… all the things a business probably wouldn’t put on a job spec.

But if you have colleagues or staff with these traits, they might be great in bringing forward-thinking and innovation to your company. 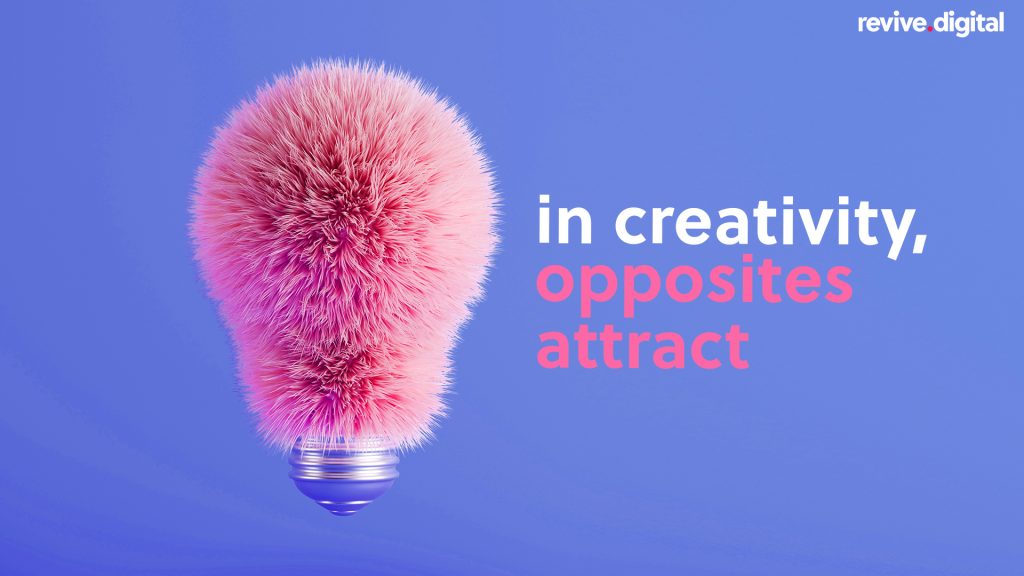 Psychologist Mihaly Csikszentmihalyi, who is renowned for his studies on creativity and happiness, found there are ‘antithetical traits often present in creative people that are integrated with each other in a dialectical tension’. 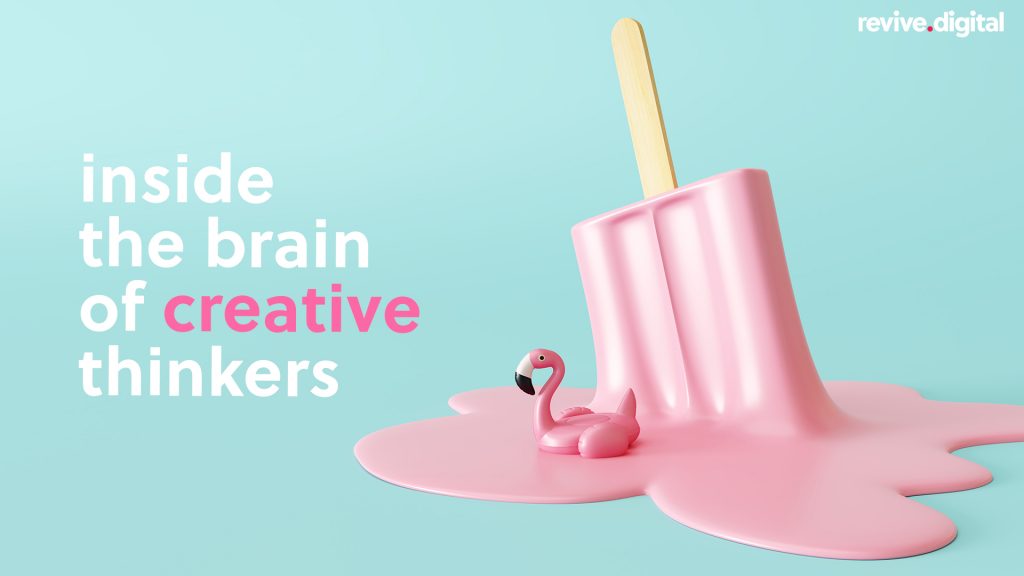 The Brain of Creative Thinkers

In the scientific paper “Robust Prediction of Individual Creative Ability from Brain Functional Connectivity,” the authors (Roger Beaty et al) look at the neurological nature of being creative.

You can see the research here. They write:

So, let’s break it down.

According to Beaty the default mode network is used for things like memory and mental simulation. So, when you have a wandering mind, your imagination kicks in, and your thoughts are spontaneous, that’s your default network.

Your executive control network helps you keep your focus on useful ideas while discarding those that aren’t working. It’s here you exercise mental control and self-regulation.

Beaty says the salience network looks out for important information. This information can be either internally or in the environment. When it comes to creativity, researchers believe it may be responsible for sorting through the ideas that emerge from the default mode network.

Ok, so what does that mean?

It seems the engagement of all three networks together makes for better flexibility of thought and creative ideas. Typically, in ‘non-creative thought’ they don’t work together.

It’s the connections between the networks that make for creativity. More connections, in theory, means more creativity. Roger Beaty and his colleagues were able to use models of this connectivity and predict a person’s capacity to generate ideas.

How Important is Creativity in Business and Marketing?

In business terms, creativity is innovation. And innovation keeps a business ahead of the competition. It allows business leaders to see things in a different way. Creativity means growth.

If you find a limitation in a product, in a service, in a process you try to overcome it.

Limitations also play a huge part in creative solutions too. Many people who identify as creative believe an obstacle (not just the lacking product or service, but others such as regulatory challenges) is as much a part of the process as the generating of idea.

When a business fosters an environment where creativity is welcomed, you’ll find there’s better teamwork and employees will interact better with each other. Not only that but having a creative environment will attract higher quality employees and retain them too. Staff will be happier, more motivated, which means a reduction in sick days and an overall increase in production.

Adobe offer managers and business leaders the chance to test their creativity quotient and assess their team’s ability to be creative.

Researchers at Kantar found that marketers underestimate the role of creativity in marketing effectiveness. They compared new research against genuine marketing profit drivers from 2014 to discover that marketers placed multimedia at the top of the list of profit drivers and creativity fourth. But what statistically drove profits were brand size, followed by advertising creativity and then setting budgets across geographical locations.

So, you need to get creative.

There are a few techniques to help your business explore new ways of thinking about a task or problem:

A typical brainstorming session might involve people sat in a room and throwing out ideas. But there can be problems with this approach.

You might find less senior participants unwilling to speak up and valid but half-formed ideas might get shot down before they’ve been fully explored.

One way round this is to pass a piece of paper round and get people to write their ideas down. This method is successful because less confident members get to voice their ideas and seeing other people’s ideas encourages more suggestions.

And by separating out the generating of those initial ideas from the evaluation of them should encourage more people to feel comfortable pitching in.

Brainstorming uses the brain’s default network but it’s not necessarily the best solution. As the default network is involved in memory you could dig up something that’s not original from those memories.

Edward de Bono is perhaps the most famous name in lateral thinking. His book Six Thinking Hats suggests the human brain thinks in a number of distinct ways and identifies six directions to challenge the brain. He popularised ‘thinking outside the box’.

Disney came up with a method that has some similarities, but uses four thinkers – outsiders, dreamers, realisers and critics.

The team have a separate room for each thinker type (or once the first thinker-type is finished, they leave the room and re-enter as the new thinker-type).

Once all four thinkers have been exercised the ideas are reviewed and refined until there’s a cogent plan. It may also be worth having a person outside the team look at it too, for a second objective viewpoint.

Boosting Your Own Creativity

You can learn the skill of creativity. And the more you practise the better you’ll be at it. Partly it’s just about understanding how to use the creativity you have inside.

Get away from the computer, go the theatre, take a break. To foster ideas the brain needs fuel. But if you don’t let it rest it won’t generate the ideas you want.

Think with a different head. Become a different person (you’re a circus clown. So how would you organise a Formula One race?)

Write everything down. Literally everything. Yes, even that crazy idea about ducks you had this morning …

Go back and review them when you’ve forgotten about them and you can be objective. You’ll be surprised how good some ideas look like after a little time away from them.

And practising everyday creativity can help you understand where you fit in to the process too.

Chefs, scientists, web developers and entrepreneurs are all required to think creatively.

You might write a brilliant letter, deliver a new dish from scratch with your own twist or take a photo that you’re proud of…

Do a little everyday. You’ll notice the difference.

Imagination used creatively in marketing, and commercial success are linked. But don’t create for creation’s sake. Keep your marketing creative, but effective too.

When you run a business you can easily get caught up in the everyday, keeping the wheels moving. You focus on what’s going on in your immediate world, you’re constantly reactive.

It can happen. As a busy agency we have to be aware of this ourselves. But we rarely take our thinking hats off.

If your business might benefit from our ‘six thinking hats’ or you just want to solve a digital business problem, you should get in touch. We’re a creative bunch. But the best way to show you is for you to see it in action for yourself.

What might happen to your marketing with a little creativity thrown in to boost its effectiveness?