Trump: The Power of Personality

Blog Trump: The Power of Personality

Was it the hair? The misogyny? The xenophobic, racist or homophobic ideals of Trump that caused the American public to vote in their droves on November 8th? Honestly, as a left-wing humanist (or hippy as my parents say), I couldn’t tell you. But as a marketer I am most struck by Trump’s approach to media and his undeniably successful marketing strategy.

Much to my dismay Trump triumphed the Presidential race, but most notably, he triumphed an earned media strategy – proving that social media and content marketing can and will work when you’re willing to take risks (like grabbing women by the…just kidding).

First up, Trump spent a fraction of what his competitors spent on traditional forms of advertising – he spent so little it became a point of tension among the media (hello free advertising). Between September 16th and Election day Trump spent $4.4 (£7 million). Which to us normal folk sounds like a lot of money, but when you compare it to the unfathomable sum of £145.2m that camp Clinton spent, it’s a mere fragment.

Secondly, not only did Trump win the race to Presidency without using traditional advertising, but he did so against it. In the primaries, his main competitors Ted Cruz and Marco Rubio spent millions on anti-Trump advertising. According to Kantar Media, $6m a day could be spent on these anti-Trump advertisements, and for what? It merely played into the villainous character that Trump was creating, or as he called it ‘the outsider’. It only helped to build his story. 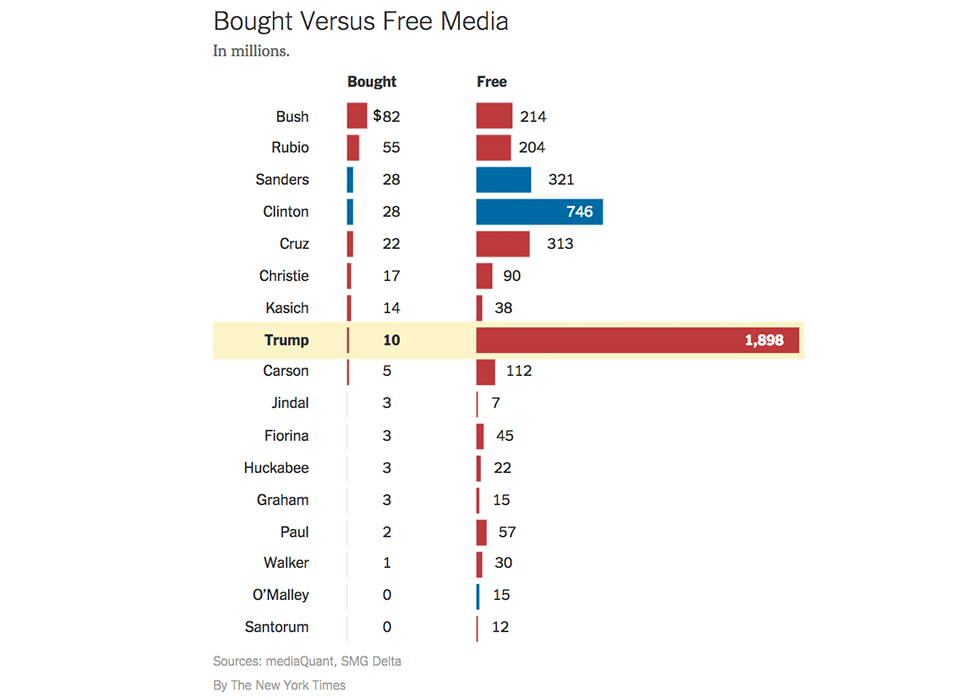 The point I’m getting at here is we (I) loved to hate Trump – it was this very hatred that ironically helped him climb the ranks (I only have myself to blame). Every outlandish comment and every despicable scandal that broke caused a media and social media frenzy – he created hot content. How many times has #Trump been trending on Twitter? Too many to count. The age old saying sticks, all publicity is good publicity – especially if you can get it for free.

Social media works at its optimum when it connects people, when they use it to communicate. Each tactless comment, each scandal, it all created content that connected people and gave them reason to post, share, Like, Retweet and up-vote. But most importantly, the Trump camp never tried to wade in on the conversations. When big brands try it often goes awry – we don’t want to talk to our dinner online, we want to talk about our dinner online.

What was the premise of camp Trump’s marketing strategy? “Let Trump be Trump”. His marketing team took a risk, and it worked – and in the process showcased the true power of content and social media marketing. So, if your business has a spokesperson that’s naturally awful but eternally fascinating, then stick them in front of a camera.

Check out what else we have to say on Facebook!