TikTok: Getting to Know Social Media’s Most Powerful App

Blog TikTok: Getting to Know Social Media’s Most Powerful App

Wondering why there’s been a big increase in the younger generation performing weird dances moves in public? And, with someone usually filming them from all different angles? That’s TikTok.

Mostly populated by Millennials and Generation-Z, it’s the fastest growing social media platform of all time. 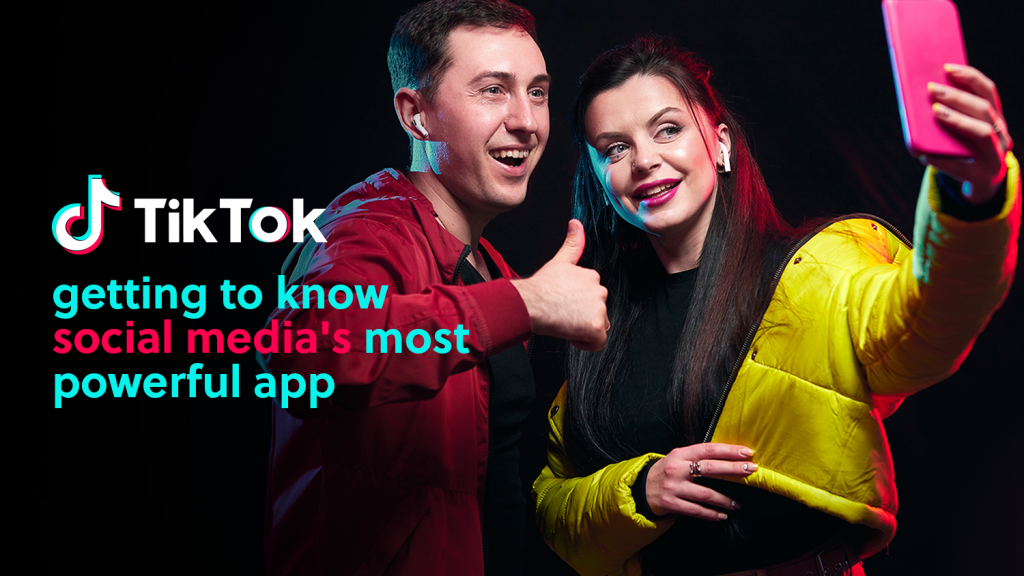 TikTok is a social media platform that is available on both iOS and Android devices, and it can be downloaded in 155 countries. Since being launched in September 2016, it’s become the 7th most downloaded app in the past 10 years.

It allows users to post short-form videos on any topic, participate in hashtag challenges and has become the ultimate social hub for young creators across the globe.

What Was Musical.ly, and Why Did It Change to TikTok?

Musical.ly was launched by 2 Chinese entrepreneurs in 2014 and within a few years gained a dedicated user base of 200 million people. It was a mobile app that blended social media networking and music.

Users (known as “musers” on the app) could create and share 15-second videos. The majority of the videos showed lip-syncing challenges, dance routines and parodies.

The app had a vast library of sound clips that users could to lip-sync to. These ranged from popular music songs, TV and film quotes and famous speeches. Once a sound clip was selected, a user could then film a video to go with it. Musical.ly had loads of effects and filters too including fast and slow motion, timelapse, reverse and a “time machine” feature.

There was also an embedded messaging feature within the app called Direct.ly and a separate live-streaming app called Live.ly.

Whereas older social media platforms like Twitter and Facebook added a blue tick to verified user accounts, Musical.ly worked in a slightly different way. Instead of using blue ticks to represent verified users, the administrators assigned golden crown emojis to famous influencers, celebrities or profiles that had a large following on the app.

The Transition to TikTok

In November 2017, Musical.ly was acquired by a Beijing based tech company called ByteDance for $1 billion. At the time ByteDance already had TikTok. Both apps were extremely popular, but in different parts of the world with each being more popular than the other in certain countries.

ByteDance’s decision to bring both the social apps together was a move towards efficiency.

But they felt that the TikTok brand better reflected the breadth of content created on both platforms. So, in 2017, TikTok officially absorbed Musical.ly.

All Musical.ly accounts were then moved over to TikTok, and Musical.ly ceased to exist.

What Changed When Musical.ly Became TikTok?

Not a great deal at all! However, the company promised new creator tools, various bug fixes and general performance improvements. This included the ability to post new reactions. Users were also promised that they would get additional content from more countries and better personalised recommendations based on usage and preferences.

How Long Are TikTok Videos?

Rather than the 6-second limit on Vine, 15 seconds is the magical number on TikTok. That’s the maximum length for a single video recorded within the app.

But users can clip multiple short videos together and post 60-second stories. With that said, users do have the option to upload longer videos that were recorded outside the app.

TikTok’s user base is dominated by Generation-Z in the United States. But, there are millions of Millennials using it daily all around the world. And, whilst it would seem that TikTok is hugely popular in the United States, the app’s biggest audience is in China where it is formally known as Douyin (due to restrictive internet rules).

TikTok is naturally a fast-paced social media app. And, if you factor in how entertaining and quirky the content is, the statistics below aren’t surprising at all.

The user demographics and behaviour prove that TikTok usage is increasing. But, below are some more fascinating statistics to help you understand how important TikTok is becoming as social networking app.

The most popular influencers on TikTok are well beyond celebrity status in the eyes of their followers. These influencers have millions of followers, and the majority form part of Generation-Z themselves. They found fame by posting lip-syncing videos, showing off viral dances and crafting comedy sketches. Here’s a list of some the world’s most popular TikTok influencers.

How To Navigate TikTok

Like videos from Instagram Stories, TikTok videos are vertical. But, that’s not the only element that might seem familiar. There are filters like Snapchat, and you can show your appreciation using hearts which are the same as “likes”. 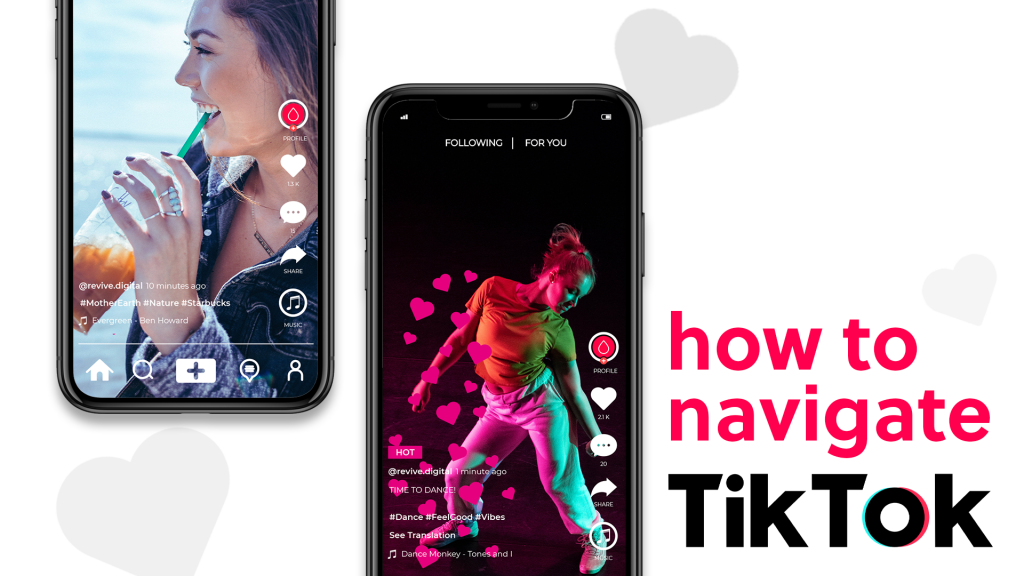 After downloading TikTok and opening the app, a video will start playing straight away (just like Instagram TV). These videos are known as featured videos and labelled “For You”.

To explore the app further, you can tap on the magnifying glass. This allows you to search using keywords and hashtags together with discovering what’s trending on the app.

Once you have started watching a video, you can tap on the screen to pause it (just like Instagram Stories too). If you then look on the right side you will see a user icon which is video’s creator. If you tap on the icon, you will be taken to the users profile where you can see how many followers they have and the total amount of hearts all of their videos have generated.

Along the bottom of each video, you will find a caption and the name of the song that’s playing. Captions contain more hashtags if you click on them.

How to Use TikTok To Market Your Business

TikTok’s emergence as a mainstream social media staple also presents an incredible opportunity for businesses that are willing to give it a go. In fact, thousands are now seeing surprising results just by having an active presence on the app. However, there’s still many out there reluctant to get on board because they believe TikTok is just a “fad” and for kids.

However, think of it this way. If we’ve learned anything from the past, we should know that social apps that are deemed as “fads” (namely Facebook and Instagram) often become integral parts of our lives before we know it.

So, if you’re a business owner and have been thinking about using TikTok for a while, here’s some of our tips to help you get started. 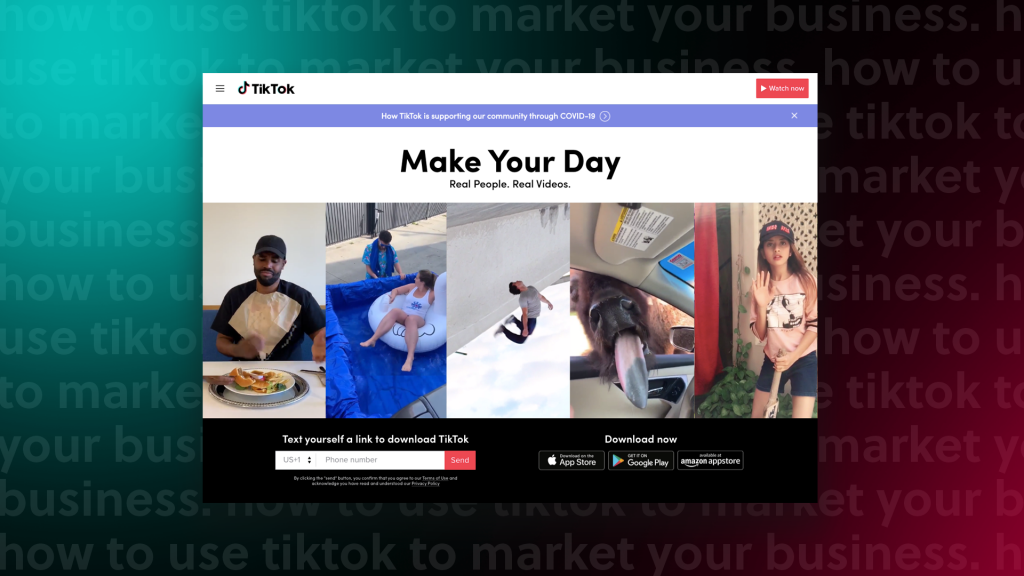 Encouraging user interaction is crucial when using TikTok for marketing. One classic example that has proven successful on the platform is by offering challenges for users to take part in. Remember, being successful on TikTok is based on authentic content rather than staged content.

Part of using TikTok as a marketing tool for your business is that you don’t need quality or highly polished content to make an impact with users. Ultimately, originality should be your content’s driving factor.

Hashtag challenges are an essential part of TikTok. At any given moment, whether you have been using the platform for a while or just testing the waters, you’ll realise that there are many challenges to participate in.

It’s no secret that TikTok influencers are becoming more and more powerful as the days go on and as the platform gets more popular. But, what the majority of brands fail to understand is just how much of an impact they can have. If you start working with influencers, not only will you experience more leads (and ultimately sales), but also an incredible boost in brand awareness.

TikTok has recently introduced to ability to advertise within the app. As a business owner, this is excellent news for you, especially if you’re not sure how to build a following using organic content. Here’s the different ad formats that are currently available for businesses to use.

These are unique filters that can design yourself and work the same way as Snapchat lenses do. They are a great way of increasing engagement. This is because they allows users to interact using AR.

This ad helps to promotes hashtag challenges, so they receive more engagement and interaction.

This is a full-screen ad that appears when users first log-in to TikTok. It called a “brand takeover” ad because only 1 business in each category can use this type of ad each day.

Ready to Join The Hype That is TikTok?

It’s safe to say that TikTok is doing a lot more than just replacing the void that Vine left behind. And, while TikTok is now competing with the big social media players, it serves a much different purpose when compared to likes of Instagram, YouTube and Snapchat.

This is due to the app being solely aimed at content creators. And, because TikTok makes it so easy to create entertaining content, this is what’s taking the company way ahead of their competition.

Hopefully you now have a better understanding of why embracing TikTok is so important. The statistics we have provided also prove that whether you are business or seasoned marketer, it isn’t a social media app to be taken lightly and that it’s time to start paying serious attention. 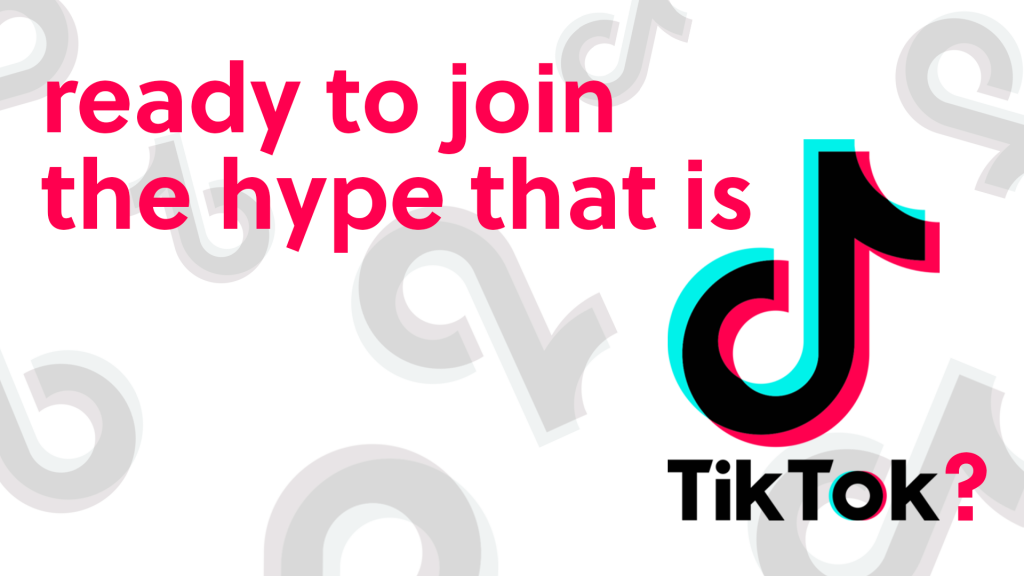